Kalashnikov. A brand to die for?

I have been watching this brand with interest since its re-design in 2014 when it created its new logo and new slogan “protecting peace”.

The new brand strategy included a re-naming of its overarching brand to ʻKalashnikov Concernʼ which, for me, causes concern, as it included the re-positioning and re-branding of its famed assault rifles as well as its hunting and sporting guns. It also included a makeover of its advertising for its 3 product ranges, (above) and itʼs somewhat tasteful packaging (below).

Whilst I can understand more the three main values of this new brand ʻreliability, responsibility and technological efficiencyʼ. I wonder if it will reach Sergei Chemezovʼs (Head of Russian Technologies) goal to be as well known as Apple across the world. Perhaps by its notoriety? 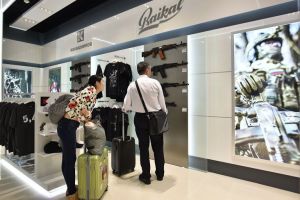 I was shocked to see its recent venture into lifestyle shopping – and to see fake firearms being sold in its new so-called ʻsouvenir shopʼ in Moscowʼs Sheremetyevo Airport? Given the present “war on terrorism” and heightened check-in procedures – isnʼt this really bad timing? But according to an airport official “the shop, offering novelties including pens, umbrellas, bags, hats, camouflage gear and  “I love AK” T-shirts, would be situated in the rail-link section of the airport complex. The model guns – automatic pistols and rifles would very clearly be imitations and would pose no security problems”. OK maybe in Russia, but what about in other airports where tougher checks are in place? 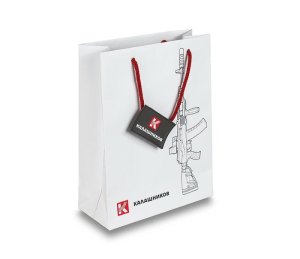 So why is this new brand strategy so important to Kalashnikov?

After sanctions against Russian exports were imposed in territories like Europe and the US, where 70 per cent of its hunting and sporting weapons were sold Kalashnikov needs to open up other revenue streams. Kalashnikovs marketing director, Vladimir Dmitriyev, told pro-Kremlin newspaper, Izvestia, “…I do not understand how it could be that we do not have our own line of branded clothing and accessories. Giants such as Caterpillar and Ferrari, just from the sale of apparel under its own brand are up 10 per cent on revenue.” Yes, but Caterpillar and Ferrari donʼt sell guns under the pretension that they protect peace?

The New York Times http://www.nytimes.com/2016/06/07/business/international/kalashnikov-russia-rifle-rebrand-restructure.html?_r=0 states that Kalashnikov is also playing to patriotic ideals associating itself with the Russian government and army and is a contrast to the United States, where anti-government sentiment is strong among the gun buying public. And then there is personalization of the product itself to appeal to a new type of consumer. there are special options, including different materials for the rifle exterior “Some people want black plastic, some people want beechwood, some people want walnut… No two comrades (customers?) have the same taste.” states Vasily Brovko, the director of strategy and communications for Rostec. “We are moving from iron to intellect.”

Whilst Kalashnikov calls the store a “souvenir shop” it is part of a much bigger retailing strategy, it plans to open 60 stores across Russia by the end of the year and is also venturing into other territories such as hunting clothing, drones, motorboats and surveillance and it seems to be working financially – it has reported a profit in 2015 of 2.1 million rubles (33 million dollars) against a loss of 340 million rubles in 2014.

Vodka and Guns, not a good mix – but it could ʻblow away the competition!ʼ Mikhail Kalashnikovʼs endorsement of a vodka sold abroad by a British entrepreneur under the Kalashnikov name was banned in the UK by the Portman Group who stated “This indirectly suggests an association with violent and dangerous behaviour,” it said, breaching its code on drinks promotions.

A Kalashnikov spokeswoman said: “This is a funky and in-your-face brand, but we don’t agree it causes people to take up armed conflict.

Well itʼs products could definitely be in your face…

Creepy and interesting at the same time. The National Trust leave the light on all night in John Lennon’s bedroom on the night of his Birthday - 9 October (good old Libran like me!) John Lennon lived in Menlove Avenue (Mendips) from 1945-1963. Yoko Ono bought the house in 2002 and donated it to The National Trust. The house also appears on the sleeve of the Oasis album Live Forever. #johnlennon #yokoono #menloveavenue #mendips #thenationaltrust #liveforever #oasis #childhoodhome #leavethelighton #liverpool @liverpool__community
Nice branding and packaging… meow! 🐈 by Russian design agency Depot for Milgrad’s Bryansk dairy plant. I like the way the cheeky blue cat travels across the package, creating different narratives as the customer turns the package - lots of brand personality but it must be a nightmare for merchandisers. Keeping the rhythm of this type of packaging is always difficult. #milgrad #depotrussia #milkpackaging #brandidentity #cats #milkbath
This weekend we had a special family party in a castle (as you do 😅) Each bedroom was named after someone associated with the region. Ours was Diane de Poitiers. The castle also had its own chapel and beautiful grounds A special moment with family! With @emmanuelalouche @alex_alouche @pascaou @000juliette000 @justine_bvr_ #weekendinacastle #châteauxdetouraine #chateaudebrou #chateaulife #dianedepoitiers
Go along to see @olivierpigasse ‘s beautiful photographic exhibits at the #sozohotelnantes. The #galeriesabrinalucas has organized the exhibition of the Myopic Topic exhibition for the next 3 months in this atypical hotel housed in a church #myopic #nighttimephotography #myopiceyes #olivierpigasse
The end of an era. My last day at the Ecole de Design’s building at la Chantrerie. I have worked there for 17 years. I have seen it grown from a small school specializing in product design to that of international dimensions with all design disciplines being taught from robotics to interiors, to food design and this year, fashion design. I can still remember my second interview in French feeling so uncertain of the questions being asked of me (rapidly being translated by @olivierpigasse) thank-you for helping me! It’s been fun, it’s been rewarding, it’s been familiar, I have met some really great colleagues and friends and it’s been ever-changing. Looking forward to seeing the inside of our brand new building on Ile de Nantes next week for our opening party. #lecolededesignnantesatlantique #teachinglife #newpastures #internationaldesignschool
All the colours of the Queen. RIP Queen Elizabeth.