The hidden, mysterious, brand DNA of a biscuit…

In the middle of a Branding Workshop the other day, we were talking about brand rituals and I asked the students how they ate an Oreo. They gave me varying responses, some of which were the preferred Oreo response TLD (twist, lick, dunk). I then asked them if they had ever noticed the graphic stamp on top of the Oreo. No-one had noticed, or perhaps they had, but had never thought about it. Have you? Well above is the graphic of the biscuit design and the biscuit itself.

I never knew about this until fairly recently, but the design of this biscuit has been studied by many through the years with some interesting theories.

If we go to the original design (see below) first introduced by Nabisco in 1912, it used an organic wreath for its embossed pattern.

Later, two pairs of turtledoves were introduced in the 1924 redesign – The two turtledoves in holy scripture and in literature present a picture of devotion and covenant loving kindness or a loving couple.

The Oreo stamp design we know today stamp was introduced in 1952, and it has remained unchanged, and, in the words of Pulitzer Prize-winning architectural critic Paul Goldberger “the stuff of legend,” ever since.

Writing in 1986 (on Oreo’s 75th Anniversary), Architectural critic, Paul Goldberger declared that the Oreo “stands as the archetype of its kind, a reminder that cookies are designed as consciously as buildings, and sometimes better.”

However, if we dig deeper, there is more mystery surrounding the design of this biscuit stamp. The blog, Gnostic Warrior calls it the “holy grail of cream filling and cookie.”

Perhaps you have seen the film or read the book, The Da Vinci Code? If you have you will know the story of the Knights Templar. There are two main parts of the stamp design, the “Knights Templar” symbology and the “Cross Patee” – this two barred cross is called the Cross of Lorraine which was carried by the Knights Templar into the Crusades. Does the cookie have French origins? Because this cross forms part of the Heraldic Arms of Lorraine. The cross also has associations with the German military and today’s Freemasons.

There are 12 “Knights Templar” cross patees in a circle with 12 dashes and 12 dots. There are also 90 notches around the edge of the biscuit.

However, if we look at the parent brand’s logo Nabisco and its evolution (above), we find the same cross again.

Adolphus Green, the baking giant’s first chairman, took charge of developing an entirely new brand-named cracker, Nabisco. The Bernhardt Fudyma Design Group commissioned to re-design the original logo created in 1952 by Raymond Loewy, says, on its website that “Mr. Green found a simple design – an oval crowned by a double-barreled cross – while looking through his collection of rare books. During the 15th century this design was used as a pressmark by the society of Printers in Venice. Prior to that, in the early Christian era, the mark symbolized the triumph of the spiritual over the worldly.”

If we go to the name Oreo, the etymology of the word gives us two words. Or and Eo. The In Hebrew, the meaning of the word is light, and it can also mean dawn, daylight, early morning, sun, sunlight, and sunshine… The word Eo has a similar meaning from the Greek word ēōs, meaning dawn. In French, Or means gold, and interestingly, Oreos used to be sold in a golden box and Nabisco also make the Golden Oreo.

So who designed the Oreo biscuit stamp? according to Indyweek it was designed by Engineer, William A. Turnier. He worked for the entire 49 years of his working life at Nabisco. In 1952 he was assigned the task of producing a new design for the Oreo.”

Nabisco confirmed that Turnier worked for the company between 1923 and 1973 as a member of the engineering department where he created dies—basically high-tech cookie cutters—to stamp patterns. 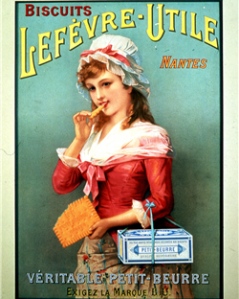 After our discussion about the Oreo, we moved onto a Nantes-based French brand which the students all know very well, le Petit Beurre, developed by the brand LU (then known as Lefèvre Utile) which also has an interesting history in terms of its biscuit design.

Lefèvre originally sold biscuits from the English biscuit factory Huntley & Palmers and then he began his own production in the mid 1800s.

The origin of the French Petit Beurre (literally Little Butter) dates back to 1886, when Louis Lefèvre created a this square butter cookie in his Nantes-based biscuit factory. Married to Mademoiselle Utile, the baker decided romantically to place their initials “LU” on every biscuit. LU rapidly became a benchmark in terms of French pastry and confectionery and has now become the global brand name of the company. After launch, the biscuit design and recipe was copied many times and was therefore patented in 1988 with the name the Véritable Petit Beurre.

There is also some intrigue around its unique design. Let’s take a look:

The stamp was developed with an English company called T and T Vicars.

Interestingly, Raymond Loewy, also played a part in the history of LU. In 1956, Lefevre asked Loewe to modernise and redesign its logo which still exists today.

For more info on the biscuit history of LU, there is a permanent exhibition of all the history and communications of the LU biscuit factory in the town next to where I live at the Chateau du Goulaine